“The more you are personally involved in telling your story,

the more the listener is drawn in.”

Jan Miller is a force of nature. Based in Nova Scotia, Canada, she is a renowned international consultant and trainer specializing in film and television co-production and co-venturing. She is best known for her pitching and content development workshops and has presented her unique brand of training across the country and around the world. 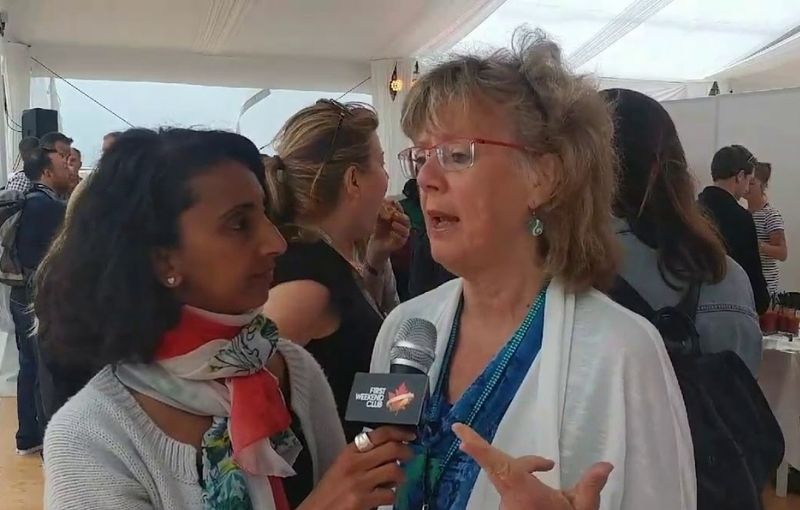 As a global consultant, Jan has also worked closely with organizations like Creative BC and the Canadian Media Producers Association (CMPA), leading missions to the Rio Content Market, Berlin’s European Film Market, and  Hong Kong’s FILMART.

Committed to supporting women working in the industry, Jan established Women in Film and Television-Atlantic (WIFT-AT) and served as the Founding Chair for six years. She launched their annual Women Making Waves Conference, the WAVE Awards, and the Shadow Project for Atlantic women directors. She presently serves as an ongoing mentor for the organization. Working with Women in View, Jan designed and delivers the industry component and pitch training for Women in View’s unique Five in Focus program, which focuses on different sectors in the screen industry including female directors, animators, and indigenous writers/directors.

“I am grateful to live and work in Eske’kewa’kik on the unceded traditional and ancestral homelands of the Mi’kmaq People. We are all Treaty people.” – Jan Miller

Where it All Started

Jan started her career as a clown. After co-founding the seminal Theatre Resource Centre in Ottawa, (now Toronto), her first professional clown gig was with the Royal Bros Circus touring in a big school bus through the Maritimes. In Edmonton she and clown partners created the unique clown and mask company Small Change Theatre. From NY to London, Edinburgh to Singapore, Australia, Japan, France and across Canada – armed with a delightful repertoire of mask and clown shows, Small Change became a Canadian cultural calling card.

A Career of Pitching

In the dead of Canadian winter in Edmonton, Jan pitched leading international directors Werner Herzog, Costa Gavras, and Jiri Menzel to attend the  Local Heroes International Screen Festival, an annual event she founded and ran for years. One guest, she was enticed to attend was twice Oscar-nominated Australian Bruce Beresford. While driving from the airport into town across the frozen fields of Alberta, he reportedly said, “I turned down Cannes. I turned down Venice. How the hell did she get me to Edmonton?!”

For fifteen years, Jan and her husband Geoff have been breeding purebred standard poodles. Their litters are theme-named, including famous movie directors Ridley Scott and Costa-Gavras and music legends Ella Fitzgerald and Annie Lennox.

What People are Saying

“One of the highlights of WIA Vancouver’s ACE mentorship program is being coached by Jan Miller! Jan has the gift of intuition that guides each participant both to speak about themselves, succinctly, professionally and with confidence, but also how to articulate their creative vision. This is all accomplished with Jan’s trademark sense of humour and kindness. It is life changing and career changing. Jan is magic!”

“Jan Miller’s Pitching Workshop at the Sithengi Film Festival (Cape Town, South Africa) had a profoundly positive impact on our local industry. She put producers and screenwriters through the rigors of pitching our projects and honing our presentational skills before an International Co-production forum. Jan’s rare gift for story, the psychology of selling, and her knowledge of International Film and Television are simply remarkable.”

“Next time I’ll hire Jan from the beginning”

“I can’t thank you enough for the guidance you gave me in shaping my pitch, Jan. Dozens of people approached me the next day to tell me that they really connected with the story. The next time I have a project to pitch, I’ll save myself 40 hours and hire you to help from the beginning.”